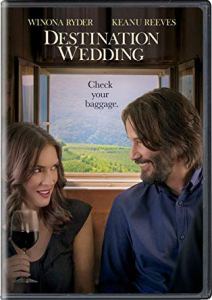 The texture of “Destination Wedding” works on the element of taking two stars that are in a later apex of their life who starred together previously in an auteur movie but letting their craft with dialogue here burgeon into an almost twilight version of “Before Sunrise”. Even though it ends mostly with a resolution, the aspect of Winona Ryder and Keanu Reeves sparring but with a sense of experience is quite intriguing. Reeves is much more comfortable in his skin and with dialogue than ever before. There is a lyricism to the way he delivers his lineS and Winona Ryder seems comfortable as well and makes one very nostalgic for the years we missed of her acting. She is no longer an ingenue but her sense of life experience is quite palpable. Shot in mostly single shots, the body language plays with such a sense of knowing that despite how black and white the conversations become, there is always a sense of levity. The release of this film in the theaters was low key but its impact is quite inviting much like “Sideways” but without the cultural phenomenon. It is an exercise of two actors who know what they are doing but don’t need to anything more than to let their auras flow. The only trailer on this disc was “Serenity” which is again two actors like McCoughney and Hathaway playing against type for the texture of entertainment.