The balance of tone is always a necessity in franchises but the passing of the baton is always a tricky proposition or it simply can be the reflection of an idea not being new, but of a different perspective. “Men In Black International” is a perfect acceptable addition to the pantheon of MIB but does not necessarily have a big stakes perspective to overcome. The aspect of a gung-ho new recruit and a seasoned agent fits the bill and in many ways it takes the angle that the end of the first MIB set up well with Linda Fiorentino and Will Smith at the end (though it was never built on). This uses it as the next logical step though Tessa Thompson’s character M is a bit more safe instead of Linda’s wonky morgue attendant. Thompson gives the sense of wonder that propels the idea of her love for the aliens she is seeing.

The tone of the relationship between her and Chris Hemsworth is of course not played up though the basic chemistry is there but not as vicious as it was in “Thor: Ragnarok” but that was a much different world. They play more like brother and sister here which definitely works. But, it comes off less than it should because there is not more electricity between Hemsworth and a select other character who, despite being an actress of note, has an almost two dimensional play on her character. where her previous role in a Paramount franchise was so electric. It is not her fault but something is missing. Again it comes down to stakes. F. Gray Gray as a director is perfectly adept with the material and smart to stay away from big set pieces so the budget seems within check (though that might not turn out to be true). 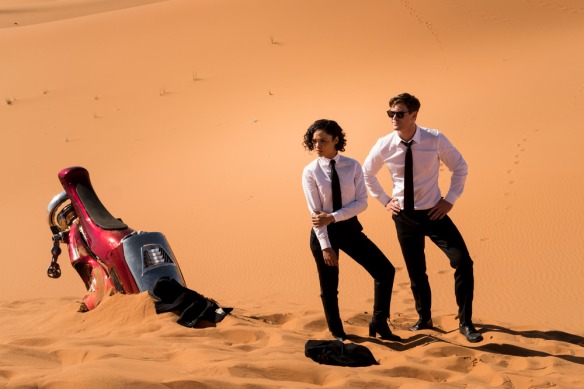 There are some scenes in the desert though that are balanced oddly between the gamut of “Star Wars” and “Spaceballs”. However in the film there is no real connective moment that transmutes the idea of what MIB is. Even “MIB III” despite how fantastical the set pieces were (especially at the end) they (like Barry Sonnenfeld) knew how to make it connect. The resolution here doesn’t have that since there is never a sense of any real danger. That does not make it any less fun. It just makes it less pertenant at times. Like the previous “Men In Black” trilogy, it is also about the weird aliens, not so much about the design but the comic timing. Whereas the old school chum of gangly aliens that chilled with Smith are still there (albeit very briefly), there is no throwback to the old film. Even an old school wink, like Mel Gibson and Danny Glover in “Maverick”, just would have helped. A photo of Tommy. A dorky snapshot of Will Smith just out of eye sight. Emma Thompson is fine but she is limited in her role.

Liam Neeson’s character will not be discussed too much here but he plays it more straight-laced though some darker comedy would have definitely progressed the story. Again, there is nothing primarily wrong with “MIB International”. Chris Hemsworth is aloof and debonair (though too clean cut). Thompson is wonderfully optimistic yet grounded. But it doesn’t seem enough. What saves the film most times is Kumail Nanjiani as Pawny, a small alien who ends up serving M (Tessa Thompson) because he thinks she is a queen. He has the best lines and elevates the proceedings. “MIB International” is perfectly fun but safe, adventurous but doesn’t paint outside the lines, paced right but without stakes to really up the game.