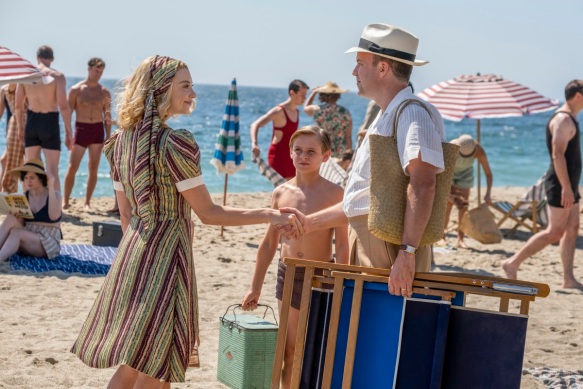 The essence of “Penny Dreadful: City Of Angels” is showing the tension and the strife that lurks beneath the texture of every day lives. Though mythology doesn’t figure in as heavily (though it is lurking in plain sight), the essence of darkness pulling the strings underneath sees to move quietly. The aspect of “Dead People Lie Down” is more referring to the idea or mythos behind what people are and even if they perish, their acts live on. At one point, even in its dark context, there is almost a feeling of “Raiders Of The Lost Ark” more within the tone and not the actions. There is underhanded dealings in these ways that point to corruption. Writer John Logan has always been good at putting these ideas together, even with stories like “RKO281”. He loves Hollywood lore but also is in a unique position to posit everything from class to racial to economic struggle and place them on an interweaving play on film. The aspect of light and darkness is still there but it is reflective more or less in the perception of the characters.

Detective Vega can see aspects clearly but he is torn. Nathan Lane’s detective has the same mask but from a different perception so the balance can show through. The most intriguing and yet most traditional part of the episode is Vega’s dealings with a Sister Molly who has a connection to a person of interest. There is a light reflection but it is about understanding the tenets of religious philosophy but also the tells that Logan puts in other characters. There is undeniably a texture of masks here. However these scenes and the ideals they portray are very interesting in the overall texture as is unknown forces are moving the chess pieces but without the payers actually seeing them. Episode 2 is a build episode for pay-offs at a later point but continues to build the world, step by step.