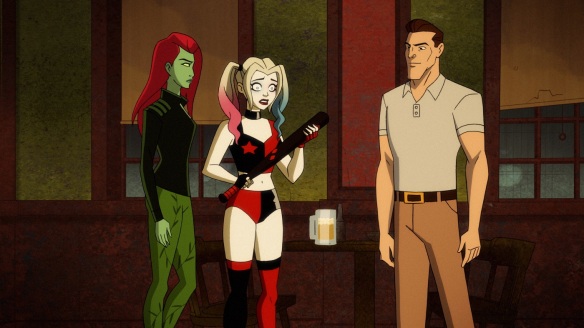 With Harley Quinn, the approach seems to be in a unique point of view in both subverting expectations but also creating canon much in the way Marvel and specifically Star Wars does. In “All The Best Inmates Have Daddy Issues”, it examines the initial times before her turning that Harley met with Joker at Arkham. Even though some of the scenes are laid down for fun, there is a dark through line that definitely increases the lore. Granted the set up has Poison Ivy and Harley in a pub playing a drinking game. The guy behind the bar there reminds Harley of Joker or makes her think he is Joker but as a normal person. It brings up all kinds of psychological reflections in Harley. Nothing heavy but definitely noticeable in terms of how she as formed. It does an interesting pivot in setting up Ivy as a good friend as well that is reflective and also explains Harley’s distrust of the establishment even when she was sane. She is being played like a pawn by Harvey Dent understandably but more interestingly, rather buffoonishly by Commission Gordon who seems more interested in ego rides on Batman’s coattails than  solving crime. Batman seems more engaged in rage in terms of the Joker and others than anything else beyond his own shadow. The aspects that the episode tends to reveal is the tragic flaws of everyone involved.

Granted Ivy is murderous and that cannot be unplayed but there is a rhyme to the reason. No Riddler puns here. Joker sees something in Harley but something that can’t bring him to disengage what seemingly happened in his childhood. Now granted misdirects abound and are inherent but it reflects back in the break of the story. This episode is more dense with references than most but again, it shows that “Harley Quinn” as a series is trying different things. While the aspect of just a Harley romp would be satisfactory, pushing it a little bit beyond provokes more understanding. Joker knows the benefits of publicity but also a life to lead. What is the most interesting is one simple line, while Harley is watching the would-be Joker behind the bar. The man sideways mentions his girlfriend and her kids (not his). It might be Joker messing with Harley all over again but when she says “He said he didn’t want kids”, is more a gut punch to Harley than any bat…and that is the point.