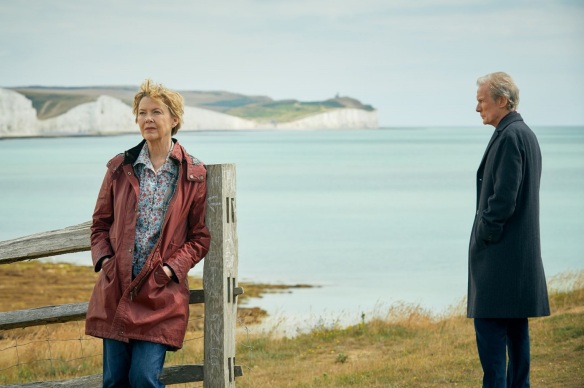 The essence of personalities reflects usually in those actors playing them and the location in which it is set. That said, the through line of “Hope Gap” starring Annette Bening and Bill Nighy is universal. The interesting predilection is seeing it through the shortcomings of their son Jamie. He is not a failure by any means but he is a product of his parents, one of which is fiery and combative (in her own nature — as played by Bening) and a quieter more introspective father (played with his usual reserve by Bill Nighy). The son Jamie is played by O’Connor who recently starred as the spurned Mr. Elton in “Anna.” also with Bill Nighy. Likely that film came after this one so Nighy must have been adequately impressed by O’Connor and perhaps recommended him for that film. Bening is the real luminary here as she always is. She has an intensity and is not afraid to bury herself in a character that could be unlikable but you can see her point of view. It is not that she is unlikable but perhaps more unwavering in her beliefs which in many ways makes total sense. She is big into faith but it is not pushed in the face of the viewer overly. It is just part of her make up that she believe marriages should be worked on and not thrown away. But her character is also blind to certain ideas of happiness versus unhappiness..

She unfairly burdens this upon her son with guilt, not with malice but simply because it is her nature. Bill Nighy is the perfect foil but his essence of character of course is overpowered by Bening by its nature because his character is more subtle and hers is more obvious. The tome of marriage is also interesting because Bening is married to Warren Beatty and mother to his children. His power and aura against hers (which was powerful already) is very much an interesting irony/insight but also maybe something she saw in the script, It informs the character even subconsciously and obviously despite it being a completely different situation. The film also takes place near Dover in England so the cliffs play a part but the title refers to the little pools of water where life lives when the tide goes out trapping fish and crabs in small pools. 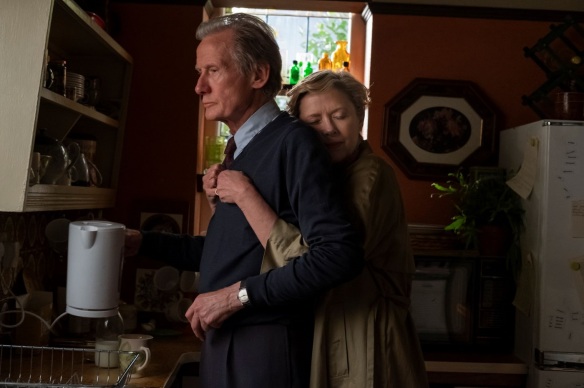 The metaphor is based in the fact of where life lives and how it progresses. The style and performances many times cross over into melodrama unfortunately which the writer.director simply might have balanced too hard in one direction. There are numerous flying drone shots over the gaps and the area to push the point. Its metaphor s effective and interrelates to the poetical nature of Bening’s character who is also specifically named Grace. “Hope Gap” is a nice character piece that overcompensates when it didn’t need to. It’s personalities are fully formed enough and to hit  them over the head seems unnecessary when the story itself and the actors would have provided that anyway.