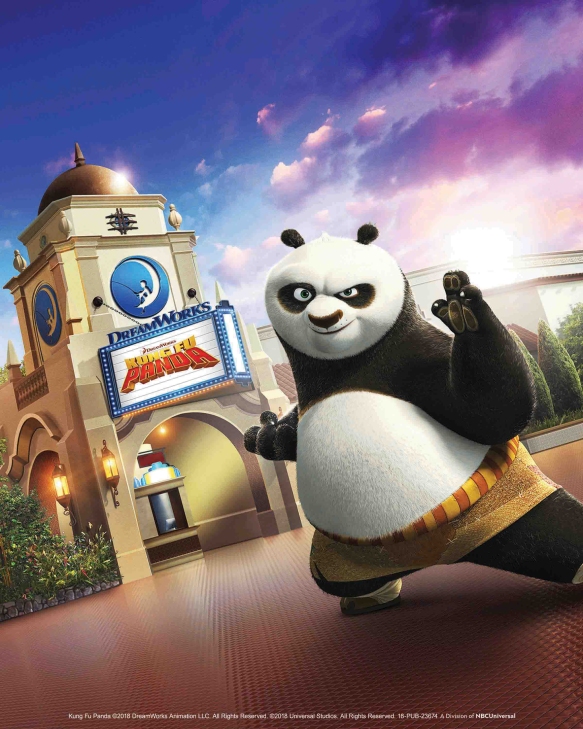 Coming in June this summer, the newly re-invented Dreamworks Theatre and the release of a specially-made short film: “Kung Fu Panda: The Emperor’s Quest” are being introduced at Universal Studios Hollywood. It took a year and a half to get to this long- awaited moment where kids from all over the world will be completely immersed in a 360 degree visual and sound adventure. Jon Corfino, Project Director & Show Producer at Universal Studios Hollywood Creative, sat down to discuss bringing together this new experience

What is truly unique about this new Kung Fu Panda attraction?

Jon Corfino: We have spent lots of time and effort to re-create the Dreamworks Theatre. It has a Mission Revival architecture with a touch of Art Deco from the 1920s. Guests line up at the entrance of the theatre and pass a ticket booth meeting a sleeping-on-the-job Pinocchio (from the “Shrek”. Movies). [They will] discover a very lavish outdoor garden with details from the many animated features produced by Dreamworks. In the lobby, they will also experience a mural show with the various familiar Dreamworks characters explaining that it’s time to go on a “Kung Fu Adventure”. The whole point is to immerse guests into the world of Dreamworks with lots of visual illusions projected onto all the surfaces and the walls. In normal time, all of the walls are solid grey, but as you enter this place, an amazing set of visual effects [is projected] giving the guest the illusion you are in fact in a lavish theatre from the Golden Age of Hollywood. What is unique is the use for the first time of the integration of interior projection mapping in order to immerse guests in a 180 degree adventure. It is as if the whole theatre comes to life in front of your eyes. We are also be using 7 Christie 4K boxer cinema projectors and a 360 degree surround sound audio. And, as an extra bonus, we will have sweeping physical effects from water to wind in order for the audience to truly be part of this adrenaline ride!

JC: Absolutely! We have created a total illusion of a world that is not just here but only projected into this reality. This is also the only show where it’s worth sitting a little bit in the back since you are surrounded by an action evolving from the front screen to the side walls. You will see “Kung Fu” fighting right under and on each side of your eyes.

What was the biggest challenge putting together this attraction?

JC: Usually when you have this type of mapped projection it’s done outside on buildings having a specific geometry. Therefore, you can use the angle and the bumps of such geometry [to establish the image]. But here, we have flat walls and we had to create a sense of volume, of depth. We had to do almost a 3D mapping projection. Therefore the task was quite complex. But, at the end, I know we made it work and you will be fooled by what you see. You will believe! Like you believed in the magic we had created in the Harry Porter Castle main attraction. By the way, this is not a 3D attraction because 3D is better used when the action comes at you from the center and front of the theatre. But here, because the action is taking place all around you, it would not have been as effective with 3D and therefore we decided to use the mapping technology of projection instead. This is all about your peripheral vision and about immersing yourself in the Kung Fu Panda world!