The texture of comedy versus drama placates itself in the idea that people act and function a certain way because of notions of situation, upbringing and general perceptions of morality.

With the greatest market share of viewers, CBS uses their intentions to pick shows that both reflect the brand but progress the narrative to create a sense of tension, both sociologically and psychologically.

With “2 Broke Girls”, creator Whitney Cummings envisions an ideal of life that is prevalent very much in youth culture today in the aspect of doing bad jobs against a better thought process. Whitney herself dictates that the concept is very relatable. What motivated her though was the opportunity to mix with Michael Patrick King, the creator of “Sex In The City” saying that his “work formed me as a person” adding that after consuming “Sex” she “went and bought 100 Christian Louboutin shoes”. The key for this series she says King came up with and would not back down from is “two girls in yellow uniforms” and the fact there “was a diner and places where you put trays down” alluding to his style as more “visceral”. For her, the original names of the two girls were “Black” and “Blonde” which evolved when one of her descriptions for “Blonde” became “Homeless with a Horse”.

King, for his part, wanted to try to make “Girls” as “contemporary and edgy as it could be”. He did what he deems his “Scarlett O’Hara search” before integrating with Whitney in terms of the style. One of the cruxes that drew him to this specific concept was the idea of the “scary dynamic of talking about money on TV”. In terms of comparison with his earlier show, King says Carrie Bradshaw from “Sex” and these girls are very different in their DNA. If Carrie Bradshaw and her closet were Narnia then “2 Broke Girls” is their evil twin with chick lit. “Sex”, he interrelates, was playing with “the reality and fantasy of girls in their 30s”. Whereas the girls in “Sex” have check lists, the girls on “Broke” barely have checks.

Adding within the ideal of sociological structure and its reverse intentions, “How To Be A Gentleman” works in the congruence that equal reaction in terms of manners requires a bit of a kick in the pants.

David Hornsby plays the lead character here who is a bit of a stick in the mud. The idea to create this sort of buddy comedy of sorts grew out of a short manners book that crossed his desk. The progression, he dictates, is based in idioms like “When waiting at an ATM, a gentleman does not check his balanc”e. The structure of a gentleman he finds rests within the auspices of Cary Grant or George Clooney who reflect in the ideals of the “strong-jawed but less-misogynistic James Bond” types.

Dave Foley, ever in lighthearted mode, moonlights with gusto as Hornsby’s boss explaining “I think that he knows it is pathetic trying to stay relevant” but that he “is charming in his need to try to appeal to the younger” sect. Part of the notion for him in the character reflects on the idea of being 50 in the workplace because “the intention is hilarious”.

Kevin Dillon, playing the macho structure to Hornsby’s featherweight, was shooting the end of the HBO series “Entourage” at the same time though he said he hardly planned it like this. The irony is that besides the pilot, the first day of the cast being together is right now. 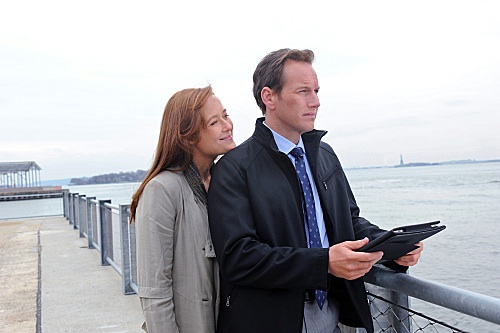 Angling away into the perspective of drama, “A Gifted Man” takes on a more paranormal structure while dictating a grounded scenario where a doctor recently mourning the death of his wife begins to become aware of other possibilities around him as he makes his rounds.

Patrick Wilson, playing the doctor of note, says people will want to assume certain aspects about his character especially in the fact that “he has an answer for everything”. Wilson explains that this man has a connection to the spiritual world and that “this constant struggle will be explored” in the fact that he is battling “being frustrated and being heartbroken”. The biggest challenge for him, as an actor, relies in the fact of not being a film or a play, is that “you have to give it out in small doses” which necessitates not thinking “from an acting perspective too far ahead”.

Exec producer Neal Baer indicates that, as the series progresses, the character that haunts the doctor will be revealed more than simply in the texture of a morning drink. Visually the idea of the show will develop , even though in the pilot, whilst setting up the relationship, doesn’t show the clinic prevalently.

Resolving the idea of a more procedural intention, “Person Of Interest” tries to spin the narrative on its head through the story influx of creator Jonathan Nolan who specifies that “the title for me suggests alot of what the show is about”. This theme, he explains, that fascinates him, is “uncertainty” which “we are all very aware of these days”. The basis for him suggests a-case-a-week structure. While the process within the medium is very different than working in film, approaching these kind of characters in this structure has always been of interest to him in that he “wanted to write something all the more dangerous”. Nolan continues that “the Batman analogy is not so far away” because these ideas were “a small feature of ‘The Dark Knight'” in that “it examined Batman and the lengths to which he will go”.

In reflection of the genesis of “Interest”, Nolan speaks about growing up as a kid in England in the 70s noting that “there was a lot of cameras up in London during the IRA attacks”. His family moved to Chicago a little later but when 9/11 happened, “you started seeing cameras everywhere again. For this reason, he explains, “it was a rich story to tap” but, for him, “the draw of the characters” is within “the way they can build change and grow”.

Michael Emerson’s character is enticed as the catalyst. Emerson describes him as “a shadowy tech millionaire…who wanted to apply himself to a justice mission” but “needs to team up with someone who is more active and skilled than he is”. The actor offers that the character can be called “Mitch”. In reflection of his earlier TV exposure, Emerson says that part of him wants to leave behind the “Lost” perception but “at the same time I have a working method” and “it has a certain sound and feeling to it”. He explains that his character on “Lost” was supposed to be just another guest spot but “I was never allowed to go home from the Hawaiian Island” which for “every character actor would be a secret dream” though it became “a little harder for me to hide”. He hopes though to “still do the odd turn here” adding that “I’d like it to have a limp or an accent”. The key for him though is “the idea that you can never have a life unobserved” because “it doesn’t seem so far out anymore”.

Jim Caviezel who plays the officer that Emerson’s character recruits for his “mission” describes his character as “a former Special Forces/CIA operative on the surface” but “deep down is a guy who is searching for a performance”. Ultimately the ideal for him is about becoming “redeemable” though achieving this through different roles was a “little more controversial than he thought it would be”.

Examining the new shows of CBS leading into the fall, the inherent balance shows the continued predilection towards a movement of both broad comedy but also edgy drama fare which challenges the norms of audience involvement with a definite creative edge.

At the TCA CBS Summer Press Tour during the panel for “Two Broke Girls”, Michael Patrick King, “Sex and the City” writer and the director of its two film adaptations, announced that a prequel for Sex and the City is something he doesn’t “even imagine doing.” Rumors have been abuzz about a prequel film following Carrie, Samantha, Miranda and Charlotte taking place prior to the popular HBO television show. According to the rumors, Blake Lively would play young Samantha, Selena Gomez would play Charlotte, Emma Roberts would play Miranda, and Elizabeth Olsen would play Carrie Bradshaw.

King stated, “The idea of going backwards on ‘Sex & The City’ is something that I don’t even imagine doing. I haven’t read the books, but I have no connection to the prequel.” King said that he was only interested in Carrie Bradsaw as a character in her mid-30’s to 40’s. He went on to add, “I didn’t even want to know who her parents were.”

Now this doesn’t really put an end to the chance of a prequel, but it doesn’t seem like Michael Patrick King would be on board. What do you think?