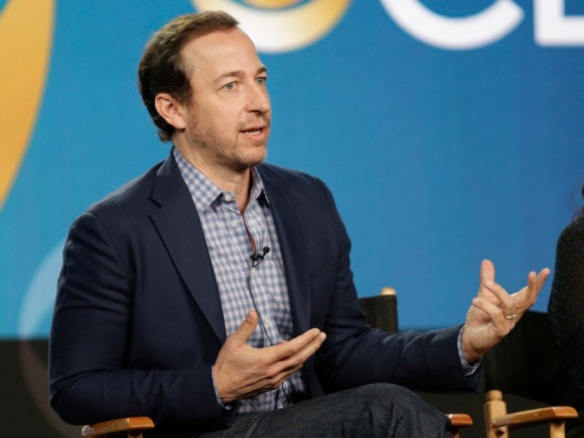 Can you talk about the perspective of “Instinct” as a series?

Michael Rauch: [It is all things] combined, both nature and nurture, [and for the lead character] it formed a very specific type of way of looking at the world. What we talk about in the pilot is abnormal behaviors and, for him, he felt abnormal as a child and gradually as he got older realized that who gets to define what’s normal and what’s abnormal? That maybe being abnormal is actually normal and that’s not a stigma. That’s a big part of his way of looking at the world and, hopefully, for people who watch the show, the same thing which is that just because society defines you in a certain way doesn’t mean there’s anything wrong with you. It’s much less than, say, Benedict Cumberbatch in Sherlock where you really feel like that guy could be on meds — we don’t go into it that much although, I’d love to have the success of that show.

You described “Instinct” as a little show, but you’re a procedural on CBS.

MR: I’ll tell you, from my own personal viewpoint, the shows I’ve done have always been underdogs. They’ve always been smaller shows. So, we are on CBS. I know the beauty, the power, and the pressure of that. At the same time, we’re a mid-season show, we’re not called S.W.A.T. or S.E.A.L. team. As much as people love Alan, I don’t think he has the recognition that say a David Borealis –- who is amazing –- does, or Shemar Moore. These are guys who bring a giant audience. We’re also a little show because we have a gay male lead which I think is very non-mainstream. So I think that there are a lot of things, not against the show, but [some that] don’t necessarily make it easy to promote. It’s a light, hopefully, funny procedural. But that’s the type of thing that on CBS there isn’t a lot of. I think that in terms of the shows that are easy to kind of put forward [are done] just by a title — again, like a S.W.A.T. We don’t have that. We don’t have people driving hummers and mowing down people. So all the things that feel traditionally like CBS procedural meat and potatoes, this has a lot of more peculiar things going for it. That’s part of why we’re mid-season, and more of a character show. I think always the odds are against a show like that.

What was CBS’ reaction to having a show with a male gay lead?

MR: Incredibly supportive. I think it’s a big reason why they bought the pitch. My whole thing from the beginning, and I talked about it with Alan before we both signed on was, even though this is a gay male lead, the show is not about that. That’s number five or six about what makes this guy who he is. And this isn’t a show about gay marriage. It’s not a show about being a gay detective. We really don’t deal with the obstacles much in season one. If we’re lucky enough to have longevity, we’ll get into it and we want to be authentic to it, but it’s more just a piece, an element of the show as opposed to this is what the show is about.

Can you discuss themes of ambition too because with “Royal Pains”, the doctor there wanted to balance the lives that he had as well. Could you talk about that and the aspect of ambition within Alan’s character, but how that’s sort of reflective of “Royal Pains”?

MR: Absolutely. I think ambition is such an interesting thing because we all have our own independent ambition, we have a societal ambition and sometimes they get out of whack. So one of the conflicts for Alan’s character, for Dillon, is that he went into the CIA to please his father. Little did he know that he had his father’s genius for being an operative. It was a surprise to him and a surprise to his father, and it is the thing that drives him. At the same time, Dillon met his husband, fell in love, and his partner basically said, “If you want to live that life, I can’t be with you. Because I don’t want to be with someone who I’m going to wonder, “Are they coming home or not every day.” And so, Dillon said, “Great. I’ll quit.” And then little did he know that he misses that ambition. He needs that. He needs to fight evil. He needs to make the world a better place. So he’s in the situation where the thing he needs most is in direct conflict with the person he needs most. So it’s an ambition to be a successful partner in a relationship versus an ambition to what drives him and satisfying that. Yeah.

Could you talk about the tonal aspect? With “Royal Pains”, you guys were able to do a little bit of slapstick and then it got real dark.

MR: I love “Royal Pains” and when we first started that show, we started as a much darker show. It was very important to me and to us for it to be a show that made you feel better. I think that was a big part of its success. And I think that there’s so much great television out there that is dark, and anti-hero, and apocalyptic. I feel like there’s not a lot of TV out there that you can go along for a ride – either watch with your kids or just feel good about the world when you dine. “Royal Pains” was something that we really tried to do that with. Even though we had dark stories sometimes, we tried to balance it with humor and with character, with a humanity, and characters that you cared about. And it’s very similar in this which is we have darkness, hopefully not too much darkness. We have snakes. We obviously have murders. I’ve never done that before. I’ve never killed anyone before on a show…it’s really weird.

Even on “Royal Pains”?

MR: People died, but no one was murdered on “Royal Pains”, but people died. It’s a lot of pressure and responsibility to do that kind of show. There’s a scene in the pilot which I think they showed in one of the promos where Alan and Boyan is standing over a dead body. A guy had been stabbed 52 times and you see all the stab wounds, but they haven’t bagged her yet. To me that scene works and yet it was a challenge. I felt a lot of pressure, we felt a lot of pressure making it because these two people are in front of each other – over a corpse. So, if it doesn’t work then the show doesn’t work, but I think the scene worked. I think that scene, in a way, is a microcosm of what we’re trying to in the show which is balance, crime, and stakes with being able to have fun at the same time.

Did you have to workshop Dillon as a character in order to get it right?

MR: Marc Webb directed the pilot and he’s a terrific director. And Marc and I, and Alan and Bojana had a six-hour rehearsal one day in Marc’s apartment. And that just got everything to click.

What about your table read?

Was there a turnkey moment in the pilot? Or during the reading?

MR: I wanted to basically jump out a window after that table read because it was horrible. Because I hadn’t worked with any of the actors. They’re nervous, everyone is doing it in their accents. Alan is playing an American. Bojana is playing an American. They all have accents. The only one with an accent too hard to use is Naveen. So, it was just like Frankenstein’s monster and horrendous. Then we had a cast dinner afterward and I was thinking about how quickly my career would end after we shot the pilot. Then we started rehearsals. Once we were able to really talk about the characters together, Alan ran upon their rhythm.

The locations you guys had in The Hamptons when you shot “Royal Pains” were just amazing. But in New York City, you have to have those individual, very identifiable things. Can you talk about New York City as a character, and how that integrates into the elements of story?

MR: That’s a really good question, because we actually hired the same location person – his name’s Mike Fucci – who did Royal Pains. He has done the pilot and the series so far, the first season, for “Instinct”. He understands, as he did in “Royal Pains”, that, even though things look very similar, from episode to episode, they also have to be different. I was born in Manhattan. I’ve grown up in New York my whole life. We’ve shot on every borough, and we will continue to, so that we don’t just see the Sex and the City New York. We see the Bronx. We’ve shot in the Bronx a couple of times. We see Brooklyn, or stages of Brooklyn. We’ve shot in Queens, Staten Island.

Is there any locations that you can talk about that you really enjoyed on this one?

MR: My favorite location, we just did the finale there. We were in Long Island City on the East River, facing the Manhattan skyline, on the other side of Roosevelt Island. And just being able to have the background — I mean, my favorite building in Manhattan is the Chrysler Building. So, having the Chrysler Building, and the UN, and the Empire State Building as a backdrop…you can’t replicate that anywhere in the world. It’s the most iconic thing. But, honestly, being anywhere in New York, you feel the texture and the energy of the city. And, although our tone is slightly elevated –- we’re not going to show graffiti, we’re not going to show some of the filth that’s there –- but, at the same time, we really want to let New York be a character in the show.