The aspect of identity and loyalty progression is a cornerstone within the aspect of “Penny Dreadful: City Of Angels”. With Episode 5, “Children Of The Royal Sun”, it just depends what angle or space you run with. The disconnect with our lead character is his true paradox. He is caught between thoughts of different worlds and what rules they are governed by. That same critical thinking is in place with his partner Lewis (as played by Nathan Lane). The question becomes how far is a character willing to go for his beliefs and what is right before it becomes selfish and utterly self destructive. And what does selfish look like in that time period versus now. It becomes the balance of one’s own gratification versus the betterment of the community. Tiago (played by Daniel Zuvatto) is very aware of this and yet, his instinct plays him to the right point but his gut gets the better of him. This should be the truth of his relationship with Sister Molly but biology seems to take over there while secrets still abound between them (which should be questioned by someone supposedly as focused as he is).

The question becomes which one is more important considering his sister has met with Molly secretly and yet blissfully unaware. The greater danger is in the the Goddess of Darkness who continues to stir up trouble. Finally one starts to see her in the guise of the office of the city council as the woman of change which was not as apparent before. Natalie Dormer continues to shine in this way. She pushes as in the case of the German housewife until she control the incandescent moral grounds through almost silent manipulation. Some are willing to go all the way but what is interesting is watching Nathan Lane’s Lewis and his response when life or death becomes a choice. There is an inherent human nature of characters that is pushed by temptation more than others. The darkest point maybe is Mateo but again even with his quest and need, it is pushed by temptation. And again the goddess of darkness knows what buttons to push to get him there to the final path. The question becomes what is Darkness playing to versus the eye of Sante Muerte. She has tagged Tiago in a way as the Chosen One but it depends what ruin his path leads to.

The ideas of path and conscience play heavily into Episode 3 of “Penny Dreadful: City Of Angels” entitled “Josefina & The Holy Spirit”. This ideal can be reflected in the metaphor of loss of innocence but inherently a perspective of reality. This is true within all the characters but more dominantly the females, in this case Molly and, to a heavier degree, Josefina, the younger daughter in the Vegas family. The men lash out in violence much more diametrically but there is inherently sometime more dark tendency in how the women see the world here which is reflected in Santa Muerte and the triple portense of her sister. The Holy Spirit in many ways speaks to the harbinger of death because in many ways, the sister is building down the different ares of the story down on itself to create a powder keg. But this can also be seen in a sense of light with Molly to combat the dark. While the incessant energy of the club from the previous episode is not found here, the dread is. What is interesting is that many of the stills provided for the episode do not reflect the final episode, as if certain areas were reworked for more sustainable power (which the episode does have). This might be true since very aneel of the different vignettes throughout is pointed and creates the notion of paradoxes.

Sister Molly is both truthful and deceiving. She cannot be what her detective suitor wants her to be but he has trouble being within the structure of the LAPD what he needs to be. Yet is it truth or temptation. His brother is being drawn into a life of darkness that is undeniably fueled by acceptance. And yet there are spark points throughout the play of the story especially a simple but trigger point scene that has inherent relevance later in the story. Adding in another structure in the form of a well known comedian’s darker approach to an underlying narrative which in many perspectives is essential to this story definitely creates a tension that is building. What is also interesting in the genre spinnings of this story are the little moments including references to stigmata and the notion of both the trinity and deliverance. Josefina represents that and her path between who should listen and who does what is very telling. Again”City Of Angels” ups the ante within the series in a different way using the textures of mixed archetypes, anti-heroes and intellectual metaphors without overwhelming the viewer creating a patchwork that is both modern and yet undeniably old school and decidedly classical.

The aspect of Los Angeles is bounded by the corners of its darkness and the pinnacles of its light. The key is finding those crevices within the human experience. Episode 3 of “Penny Dreadful: City Of Angels” revels in this perception. Gone more is the Santa Muerte in its importance and more revels in the demon that threatens to create the powder keg of chaos. Natalie Dormer has been playing the yin within the yang and back very subtly in one character for a few episodes. The secondary influence was hidden and now seen. But the third is dynamic as hell. This the time we see her venerate possibilities. It is shown to a T as Rio in a large scale sequence that is not so much scale as it is feel. That is wherein her acting chops really come to bare. It is a revelatory performance depending where it goes.

Creator John Logan shows his love of period but plays it in the cool way that say “West Side Story” would have done. it is about perspective and finding the right approach. Meanwhile a different kind of balance is in the light between Santiago and Molly is highlighted in a great old world progression on the Santa Monica Pier. “City Of Angels” is as much as ode to old LA as it is about the underhanded dealings that move any major metropolitan area especially in times of massive success or utter upheaval. The political etchings are perhaps the most plain of the progressions but again it all reflects back to human nature. But the necessity of LA as a spark point especially on the cusp of war as Germany parades across Europe is of course the flash of the series. 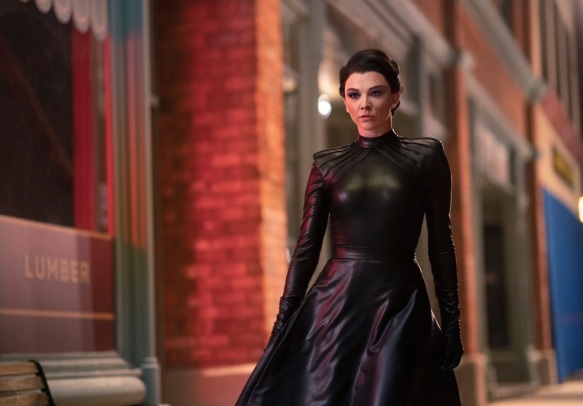 Into its 3rd episode, the idea of what the series needs to be is fanning the pace..and is almost where it needs to be. It is based in mythology in a trinity of characters where Dormer is the key but that leaves an interesting messiah complex in play. It depends where the grounded element of the series will go or if it builds to a different extreme. The genre underpinnings just seem to act as a spine and not the catalyst though the different forces seems to push back and forth. However it could be spoken that this is the catalyst of any upheaval or revolution as it were.