Betrayal (Traición) This story of a woman searching for the texture of who her mother is begins very simply and allegorically before it becomes a metaphor for the essence of being. While the set up is structured more in an idea of action-based life vs. death, its eventual thrust unfolds too slowly. While the progression of what creates her life (out of a whorehouse tryst) almost carries a beholden wistfulness to it despite the surroundings, the inherent solution reveres itself in an idealism of the passing of the baton (maybe with an ode to “Queen Of The South”). However the resolution leaves the intentions and ultimately the struggle of power resolutely inert. 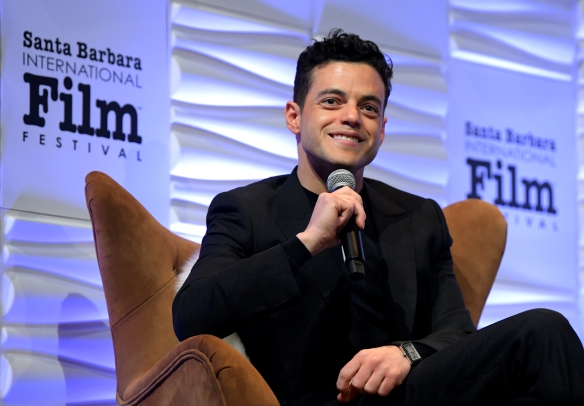 Outstanding Performer Of The Year: Rami Malek No performance has garnered as much respectability or indeed as much fervor as Malek’s turn as the legendary Queen frontman this year. Malek’s journey as indicated in his conversation on stage in nearly as frought in overcoming obstacles as Mercury himself. Though he was born and raised in Sherman Oaks, California, Malek himself is Egyptian, not far from Mercury’s Zanzibar in Tanzania. But it is taking that background and fighting against stereotypes that allowed Mercury to transcend in London and Malek thereby in Hollywood. The turning point, according to his conversation, seemingly happened with HBO’s “The Pacific” where at one point, Steven Spielberg was taping his scene audition across from Joseph Mazzello (who beyond playing John Deacon in “Bohemian Rhapsody” also played the grandson of John Hammond in the first “Jurassic Park”). That series led to other roles including “The Master” (which this reviewer totally forgot he was in). He pushed Paul Thomas Anderson in the audition with Joaquin [Phoenix] there saying “I want this”. His remembrance that there was an essence of acceptance from Phoenix he says spurred him on. “Mr. Robot” of course broke him through into the zeitgeist but it was because he says of show runner Sam Esmail’s prescience on the texture of the hacker. “Bohemian Rhapsody” came to him through that perception. He signed on with producer Graham King as soon as he was asked but then realized he had to deliver. He went to London and connected with a very specific movement coach. The one aspect not addressed was the aspect of Malek singing as Freddie which is one of the big questions since no one could really be able to do that. His texture of the man is undeniable although some story elements have been, to many, skewed a little bit to make the story more palpable for mainstream audiences. This seems to have worked as the film has performed admirably despite “the elephant in the room” as the moderator indicated which Malek finally addressed after being asked directly despite the apparent uncomfortability of the subject for him. This point was in regards to the aspect of ousted director Bryan Singer who has come under fire even more so in recent days for sexual harassment allegations despite the fact that it is his name still on the film and not Dexter Fletcher who completed the final two weeks of shooting. Malek finally did address this subject saying that working with Singer was “not pleasant…at all” and that Singer “was fired”.

Fly By Night This film, also part of the Crime Scenes sidebar (of which “Betrayal” is also part), focuses on small time crime on the outskirt of Kuala Lumpur. The tonal shifts in the scenes are both interesting and disjointed at times. The film starts off as a stylish character piece before moving into family drama before settling on an action hybrid/gangster film. While the strategy of the chess game between the police, the small time crooks and the local mafia interweaves nicely, the secondary plots including a jilted mistress seem to wash by the wayside. A particularly brutal end to a key ransom figurehead seems to simply occur and disappear. While the lead character per se: an egotistical young brother seemingly keeps falling down the same path, it is two adjacent characters. The first is that of the loyal combatant who takes a screwdriver into his own hands at one point. He has the most intensity and breathe of character. By comparison, the local head of the mafia is portrayed with such theatricality that it is hard to look away, even when he brutally goes off the rails. The resolution is finite and true to form but nonetheless solves none of the bigger problems of the plot.

Tell It To The Bees Anna Paquin always has the ability to inhabit and contextualize the aspect of the outsider while always inferring compassion in her performances. While Paquin balances this structure, she always at times can seem to be like she is acting per se thereby making it hard to see her disappear into her roles. Holliday Grainger (whom IR talked to for “Bonnie & Clyde” back in 2013) seems incessantly natural by comparison as the wife/woman scorned who falls into the arms of Paquin’s loving doctor. Granted this tome is set in the 1950s so the gist of the narrative focuses around the social and psychological tensions placed on the couple from the outside. Obviously the most biting satire or sense of understanding comes from the 10 year old child of Grainger’s character who is also dealing with an absentee father who is suffering after the war (but does his best to make everyone else miserable at the same time). The metaphor of the bees is keyed to listening and how to survive suffering. Ultimately the movie is a parable and a cautionary tale bathed with a sense of redemption and hope. Even though it tries a bit too hard, when it is carefree, it understands the balance of life is acceptance. Otherwise. it shows that darkness can consume even inside the impetus of family.