Movie reviews in 140 characters or less.

“Female-driven race, period drama with a reflexive storyline that educates & entertains plus an award-worthy performance from Octavia Spencer”

The inner perspective of “The Help” relies on the passage of time to help understand a level of societal impulse unthinkable by today’s standards, both in modern thinking and in the ways of life and how we deal with issues of race. Perceiving its way in both education and entertainment, much like “Far From Heaven” did but with more mainstream appeal, “The Help” recognizes that from tragedy comes some interesting humor that balances the equation, both in the weirdness of customs but also in the general cruelty of human beings.

The catalyst in the story is Eugenia (played by Emma Stone) who takes on an egregious task of manipulating against everything in the Deep South in terms of the societal norms of the 1950s. Using her as the more, perhaps enlightened modern precedence, she seeks to get the story of how the black maids/nannies raise the white children forming an undeniable paradox between how these people see the world as children but do little to change it for the better as adults.

Viola Davis plays Adeline with a quiet conviction that anchors the movie with undeniable poise. Her interaction with her “lady of the house” whom she calls “a baby having babies” reflects in the fact that the little girl there sees her more of a mother than her actual mother. This motif repeats in different ways with different personalities.

The most affecting aspect comes with the interrelation of Eugenia in her own life with the black woman who raised her: Constantine who was sent away by prejudice and saving of face and died. When the dialogue progresses with the idea of a broken heart, its power is striking, signifying an exceptional scene between Stone and the always multi-layered Alison Janney as her cancer stricken mother who still has the ability to redeem herself.

Every character, big and small, provides perspective in a specific way. Octavia Spencer as Milly is the most bombastic of all the characters and has to modulate her sense of duty, sickness for the system and her own life to differing degrees. In interacting with multiple households, her journey provides the most contrast.

The first involves her with a household run by a vicious daughter Hilly (Bryce Dallas Howard) and her loopy but still visceral mother (played with superb visual effect by Sissy Spacek). The contrast of the two with the venom spewing back and forth at times is exceptional. Howard has never disappeared into a role this much to the point that this reviewer didn’t recognize her. That is the innate strength of the picture in that it places you within the world allowing you to project onto these people with distinction for their plight. 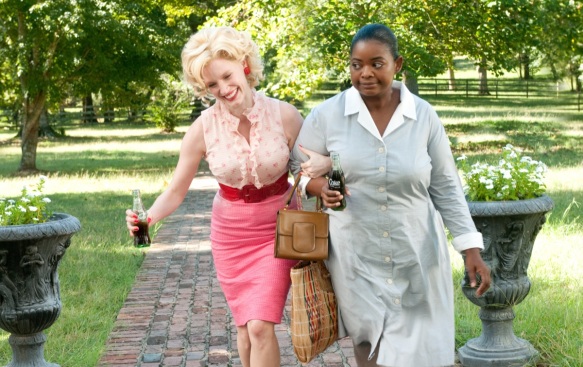 Jessica Chastain, another example, plays a blonde outsider that bonds with Milly when no one else will talk to her (since they believe she is a husband stealer). Chastain, again recently met for “Tree Of Life”, is unrecognizable which makes her performance all the more exceptional. What is interesting also is that this is not normal Disney fare. As interacted with the story diversity of Dreamworks and the Mouse’s marketing power, this film shows the power of what is possible with this partnership with “War Horse” also on the way.

Many moments persist, one of the most powerful showing the disconnect expanding from the expulsion of Constantine. That same moment when Eugenia’s mother recollects throwing out her nanny/maid of 30 years to save face, you can see the hurt in the old woman’s eyes. Despite all the disdain and racial elements, there was still a connection there. Cicely Tyson, even in her older age, plays it with such conviction as not to be believed. 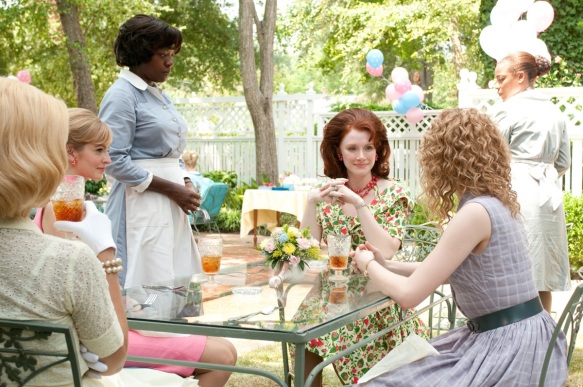 As an unknown director for most, Tate Taylor shows undeniable poise and understanding of the material, making it again, educational and entertaining, which considering the subject matter, is no small task. Like “The Color Purple” which in many ways this will be compared to (in no small way because of the lush but not overwhelming visuals, sparse but tightly controlled production design and costumes, music featuring period music as well as American Beauty’s Thomas Newman handling the score), “The Help” provides just the right balance to make everything work without scarsely a hitch but conveying an exceptional amount.