After the inset of The Bad Batch which., in itself, is a story about the search for identity, the next story arc in “Gone With A Trace” would seem to be one that diametrically needs to be addressed. Ahsoka Tano, as the long standing padewan to Anakin Skywalker, has the biggest perception (almost more so than Padme) to the psychological degregation that brought Anakin to the dark side. More than Luke and almost Obi Wan, she knows him best which is why her expulsion or leaving depending on how one sees it from the Jedi Order is a bit of a wormhole in the story since we have never seen her in live action. She re-emerged in essence in “Rebels” and we saw her have an interaction that is one of the more dynamic encounters in animation in Vader in that series. But in this episode, it is about reconnecting with those less fortunate which is what being a Jedi is. But as with most perceptions of government, people on the lower levels have lost faith.

This first episode shows Ahsoka finding her way. She has the street smarts and the Jedi know how where she could fumble through and scam her way into situations but those are not the values she was taught. While the story focuses back to simple, it is those baseline connections whether one is talking about the end of “The Last Jedi” or “Joker” where certain basic human interactions introduce a path, either to be led astray or to push forward. This first tome in Ahsoka’s journey shows her connection to loyalty but also a judgmental attitude in others. The one thing that seems to come through to her though is the inherent good nature of people. The charity and compassion is what comes forth as the values of this episode. Even when the survival instinct cuts in, the reasoning is sound. But Ahsoka’s path is complicated for she knows a bigger world but at least she sees the reality of those that the power plays of the Universe shows. She should meet up with Ventress to discuss the existential nature of their predicament.

The progression of “The Clone Wars” in the addendum that Dave Filoni has created is starting to dovetail a little bit into what is creating a bigger superstructure of where “Revenge Of The Sith” actually ends up. The initial structure of “The Bad Batch” was seemingly working on the reflective ground of earlier material which is interesting considering the recent backlash against “The Rise Of Skywalker” as far as retreading over what some might call common ground. With Episode 3, “On The Wings Of Keeradaks” the essence of what be called the Judas complex within the story line gets different but one might very well understand the nature of what is happening but also how the humanity of the clones, specifically Rex, could have been the undoing of the Republic. It is a long scale game that only someone with the foresight of The Emperor could understand but the fact that The Clone Wars is thinking along those lines makes it feel more like Rebels at times because of impact.

While much of the episode takes place inside the complex and has its share of humor, when it makes its way outside there is more a sense of scale especially in one crossing sequence, which has some odes to Cloud City in a way from “Empire Strikes Back”. It makes the clones even more human in a way and reaffirms a theme of faith per se which might have been missing from earlier seasons of “Clone Wars”. The key aspect that moves towards the end of the episode is how rules of war change but the hardest aspect to see is sometimes the darkness within which is a continual theme of the “Star Wars” universe that will never change.

The re-emergence of “The Clone Wars” points of a stream of consciousness that perhaps Dave Filoni, who also helped create “The Mandalorian”, understood. The idea that he explored later with “Rebels” specifically spoke to an idea of where lawlessness gained a foothold in the galaxy. His original thoughts were fully realized (though some of the concept art that he released years ago gave a concept of might be possible). The influences and the ideas of those glitches in the Republic system come to bear with the introduction in “The Bad Batch”. It is not the most dynamic of episodes but it moves to re-establish the strain of consciousness within the Clone Wars. Warriors get tired and tend to take the law into their own hands. The fact that the team that is recruited for a special op (they have been seen before) is called 99 which is the ironic reversal of General Order 66 by which the Emperor himself ends the conflict by a hidden fail-safe.

In the years since the last episode of the original “Clone Wars” series, the animation process has gotten better so by progression, the lines of the characters look sharper but also the subtleness of the emotions. Whereas Kenobi is less readable, Anakin’s frustration seems interestingly enough to come much more through. Whether it is the conflicting emotions or the dragging on of the war (or even more specifically the darkness creeping up on him after the slaughter of the clan of Sandmen in “Attack Of The Clones”), the brimming points seems to be becoming more defined. The crux of “The Clone Wars” always rests in the reliability of the clones, say versus a droid army. The re-emergence in a way of Echo as a harbinger or betrayer much like Judas in the disciples’ midst is an interesting metaphor to bring back into the fold. It however depends how the story moves towards its conclusion in the bigger mythology that Filoni has built.

Cartoon Network just provided IR with the new still from the upcoming Season 3 of STAR WARS: THE CLONE WARS, due to premiere September 17th.

The animation progression shows a differentiation of matter in terms that the emotional investment predicated in their narratives show a diversification that balances both humor and effectiveness.

Star Wars: The Clone Wars The second season preliminaries show the paradox we want to see heightened which is the relationship between Padme and Anakin and the splitting of duty versus emotion. This is where the darkest elements come into play. Ahsoka, Anakin’s Padewan, is coming into her own but showing more signs of recklessness which is what is inherent in Anakin’s teachings. The key is to show Anakin’s furthering differential with the needs of the Jedi Council as the holes in their defense become bigger and bigger. The most outstanding technical advance is how good the immenseness of the passing star freighters look. The hardest thing is to create that sense of depth in a heightened comic book style. It gives a sense of intensity that heightens last season’s capabilities.

South Park The series is great simply and, in many ways, because of its quick turnaround which can sometimes be less than a week. What is becoming more apparent is within its interesting human subtext. While the first couple episodes attack essences such as wrestling, it is one of the first ones about ghosts which turns into the angle of Michael Jackson not being at peace that is the most interesting, but not for the gloved one. There is a moment at the beginning when Ike, Stan’s little brother, is seeing ghosts. Now granted it is Billy Ray coming after him but the general fear and emotion that Ike is played with is almost heartbreaking. It is interesting thinking this about “South Park” but these moments are becoming more prevalent and are what balance it out and interestingly give it more depth than the other animated programs. Think about “I’m So Lonely” from “Team America”. Here is Kim Jong Il, a quite despicable person whom the guys make almost sympathetic. Of course bodily functions and sex jokes come back almost immediately but the poignancy, ironically, is there.

Family Guy With two integrated sequences in the first two episodes, “Family Guy” still reigns as the king of cool despite the fact that many young viewers might not get it. From the premiere with its extended ode to Disney 2D animation to some snarky side comments to the “Superfriends” Opening Credits sequence around Episode 3, the intent is simply inspired for those who grew up with it in the early 80s. The personification of the characters simply is in full stride since they don’t have to prove anything anymore as long as the pop culture references are sweet. Some social commentary however fleeting doesn’t hurt either.

The Simpsons The pendulum of the “Family Guy” competition resonates here simply because of the difference in the age of the creators of the shows which is being more obviously personified as both productions go on (and will inevitably be compared). “The Simpsons” head team is slightly older so their references are more old school. A good example is in the Halloween episode which pays its tributes to Hitchcock and the New Wave filmmakers while McFarlane is all about Spielberg, Lucas and the like. Not to say that some of The Simpsons’ inklings aren’t inspired. However there is a growing differential. The ode to Salvador Dali in the Halloween episode shows the production’s ability to still slice but an earlier episode with Homer becoming the Everyman Hollywood superhero comes off a little flat. 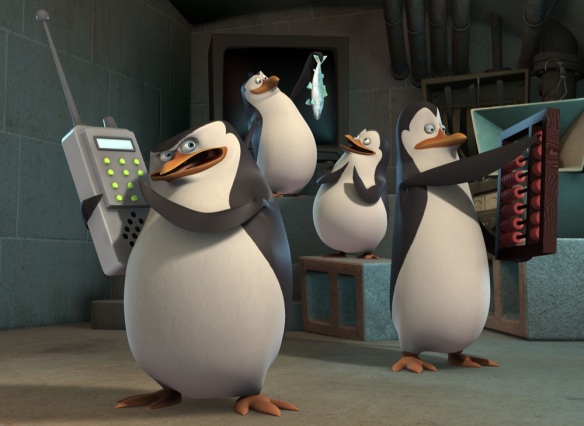 The Penguins Of Madagascar The key here which is continually interesting is the evolution of what kids are able to process. While this is a Nickelodeon cartoon, some of the elements it angles into are definitely bordering within the realm of adult. One episode has the Penguins trying to teach Roger the alligator to become more aggressive. In doing so they end up switching out his brain for Rico (the Penguin Braun). This causes the pathological elements of the unstable penguin to wreak havoc on the regular streets on NY like something out of a horror movie. Another episode has a female gopher who had never been out of the zoo (she was born in captivity) going insane when she sees the space around her. The angles show a form of psychosis which is great when you can have the cartoons function on separate levels because kids a lot of the time will just go for the surface but subconsciously get the messages that are there. Of course, then you have the aspect when the King Lemur looses his ability to bootie shake because some African monkeys put a vex on him when his ego gets out of control. The balance is maintained but it is interesting to see how the creators of the filmmakers continue to challenge the small screen.

Animation continues to build in earnest in consideration of the different cross-sections of what is being produced but the superstructured is becoming more interesting because of the different outlets. “Clone Wars” is on a different level because it is independently produced. “South Park” continues to excel because of its ability to do a quick turnaround. However, it is the emotional resonance of some scenes that is starting to shine through. “Family Guy” and “The Simpsons” are like Jay and Conan: compatriots vying for the same audience while still on the same network. “Penguins” meanwhile flies under the radar and goes on its merry way.