Diversity of content and of character has always been of paramount importance with the Showtime structure which is definitively reflected in their highlights for their Winter TCA presentations. 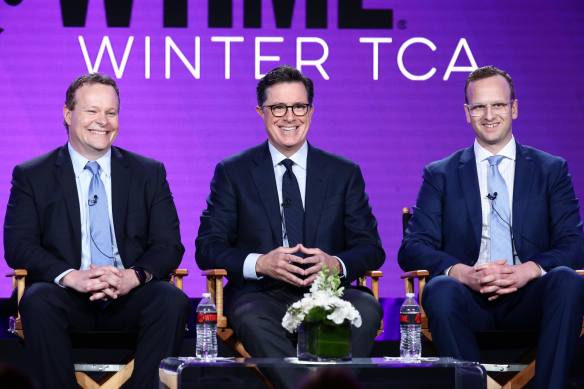 Our Cartoon President This animated romp from Stephen Colbert balances from his main gig on “The Late Show” but he speaks to the inherent challenges of both endeavors. The first has to do with the constantly changing aspects of the Trump administration: “Many a day [at The Late Show] at 5:15…no shit…we have to throw out 10 minutes of monologue.” But that said he says the approach for the animation is an interesting one: “[It is] the relationships you imagine they have animated. I think Michael Wolff [in his book] stole all 10 of our episodes…and we just guessed. We treat this series like a documentary crew came into The White House.” The irony of the current political climate shows how fluid the changes can be. Colbert explains: “In a pinch, tomorrow’s show could have a cold open on how Trump is a very stable genius.” (laughing) But he is quick to point out that Trump’s behavior shouldn’t be considered normal: “I don’t think we are complimenting him by making a cartoon out of him. I don’t think there is anything normal about his behavior. While we are doing comedy, we remind [the audience] that this is the kind of behavior you don’t want in The White House.” Despite this, Colbert realizes the comic potential: “The great benefit comedically is how uncontrolled his communication with the world is. However I love my country more than I love a good joke. He does it so often that you always have fresh material. I don’t want to hang out with him but he is the President of the United States. I go out to ‘The Late Show’ audience every night and we have this shared catharsis to laugh at. It is not jokes about what he did. It is character comedy.” Colbert also speaks to the difference in tone with his former home: “The Colbert Report”: “It is totally different vibe. ‘The Late Show’ is easier than the old gig. This guy is very different. We give our opinion on what they have heard today. But it is important that I don’t break news to my audience. It is about sharing the audience’s experiences back to them with my ideas. I am their buddy. My job is to talk about the policy the audience is already worried about.”

Billions This show continues to be a Machiavellian mediation on the notion of power but also the ambition and overuse of its influence. Brian Koppelman, co-creator of the show with David Levien with whom he also wrote “Ocean’s 13” & Rounders speaks on the elements of power and control: “It is about privlidge, It is about people that don’t have to. It is simply [dictated by] the societal region. [The other aspect] is about kings who want even more. We have long been fascinated about ambition which sometimes stands in for true character.” Damian Lewis, who plays eccentric billionaire Bobby Axelrod, speaks to the characters’ focal point: “A dramatic device that is being used here is about [the accumulation] of desire and want. We enjoy watching the desperation and ambiguity in these lives. In terms of these guys [in perspective of] the real world, they do good things and they do bad things. I think trajectory of any kind for an actor is interesting. People go down in this show but they come back up pretty quick. I think that buoyancy is why it is so fun to watch.”

The Chi The aspect of ambition from humble beginnings resonates in Lena Waite’s tale of Chicago’s urban neighborhoods but for her it is about maintaining authenticity: “Our big thing is that I want to make [sure] people can trust us. We are making sure the actors get the lingo and the swag [right]. [Whether it is] rollerskating, block parties…there are very complex [aspects] about the city…very layered. I started with the characters first and I named them with people from my life so you always have people that you care about.” Common, who exec produces the show and is also a Chicago native, talks about the texture of hope but also reality: “Joy is finding a bright place even when it is tough. Our city is unique but it resembles other inner cities in America. As Lena says, Chicago’s roots come from the South. Our history is thick. [And] the fact that Lena wrote this is valuable. She doesn’t have to talk about anybody about what is like to be a black person. The dynamic and depth of those things has to be told by us. We have to show people of color as colorful. I like it because it is fresh. We are not fitting into any stereotype. When we talk about black life, we just part of this pie too. And part of that is having relationships with other nationalities.” Waite adds to this point describes the intricacies of the details and the relationships between the characters: “My whole house looked like ‘True Detective’ when I was figuring it out. That way I had a road map to where I wanted to go.” 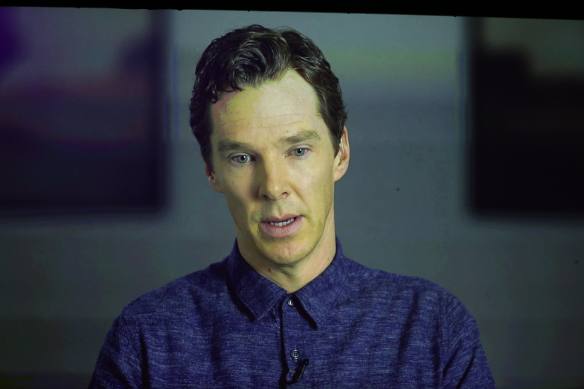 Patrick Melrose The essence of addiction and excess plays into the texture of this character within a privileged world but also the effect of mental illness. Made popular by a series of novels by Edward St. Aubyn, Benedict Cumberbatch takes on the title character in a 5-part limited series. Cumberbatch, speaking via satellite from Atlanta, comments on the texture of the character: “Relevance is always won by the universal truth in a story. If told, any story that is as mammoth in its spokes as this, goes beyond beyond analysis of class critique. We need to reminded about the damage that can be done to innocence.” Cumberbatch then speaks on the different layers within the character: “Paranoid schizophrenia rears its head and this is when [Patrick] is in the throws of drug addiction. These voices don’t just emulate from inside of him. Patrick is someone who has a great deal of tenderness but is a damaged human being. It is very different to play a character whose chaos is manifested all the time. The real goal is achieving truth but not to heighten yet still keep true to character. I’d always go home at the end of the day thinking ‘Did I do enough or too much.’ But then the very definition of externalizing emotions is role playing them inside a hotel on your own.”