The texture of “Dumbo” is an unusual one. The original, one of the first films from the animation studio at Disney, was barely a feature and buried in the lingo and perception of the time. Like “Pinnochio”, the perception was not on reality or magical realism but purely an simple surrealist fantasy. There was an edge of darkness for sure but yet the story seemed very intimate. It was not a story told by humans but by the animals themselves. The texture of a mouse and an elephant becoming friends and overcoming obstacles against those who would make them perform. The aspect of the dark world and the unknown coming towards the innocent while blended in the wonder of flight. These thematic bases are textures that were essential in “Pinnochio” and even “Bambi”. Tim Burton creates a mileau to understand “Dumbo” in the modern context (even though the story again takes place in the early 1900s). The story points are sound and the essence of whimsy is inferred in many points. But as a fable despite the ultimate resolution, the essence of risk seems candylike.

Most of the characters are painted in saccarine colors and disposition. In many ways, there is a reflectivity of 1950s nostalgia in many ways. Unlike the previous “Dumbo”, the parallels are in a pair of children who have lost their mother and a father unable to connect after returning from the war. The reconnection of both Michael Keaton and Danny DeVito as a circus ringleader and a big time promoter in their first pairing in a way since “Batman Returns” seems to not have the crackle their scenes so richly deserve. In many ways this may be the way the characters are drawn which come off muted at times and two dimensional but nonetheless the archetypes even seem stilted. Granted this is meant to work in an almost hazy way.

However when push comes to shove at the end, it is the circus folk who help propogate the progression of the third act that really harken back to true Burton when the mechanics of the ideas fuel the intention and, by extension, the eccentricities of the characters. The character that should have the most empathy is Dumbo, and that is the success of the movie since, by taking away the muse in Timothy the mouse, forces the texture even more so. While certain aspects of surrealism from the cartoon couldn’t cross over sensibly in a narrative based production per se, Burton does find a way to include pink elephants (which undeniably would be a good reason to take on the show from the get go) although the matter of approaching them is quite different.

Both Colin Farrell and Eva Green take on thankless roles per se that progress the story but adhere to the essence of Burton. But what Dumbo essentially is is Burton-lite, using his talents for a broader, more subdued audience. There is nothing wrong with this at all…it tends to make most of the film though very passive…effectively done…but in many way inert both characterwise and in a way creatively. There is the essential world building that Burton is known for but even the Danny Elfman score has lightness to it. Again, no problems but nothing that lifts the heart undeniably. 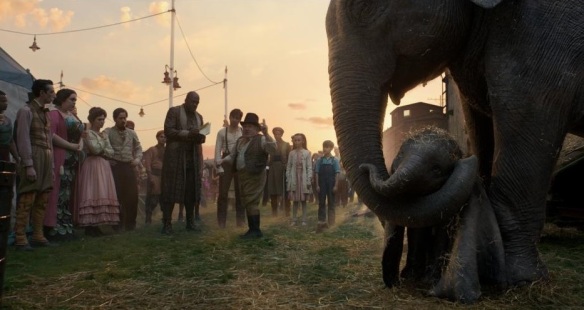 There is a glimmer in Dumbo’s eyes as he watches the pink elephants but that is fleeting. But there is also nothing quite like the moment in the animated film where Dumbo’s mother cradles her young baby in her arms from her jail and swings him back and forth. “Dumbo” makes its story in the modern era through an essence of nostalgia and human fraility but in doing so loses a little bit of the magic of being separate. There is a mythic structure in the final shots that bears ode to “The Lion King” in an ironic way. Also, listen to the final notes of the closing credits where that aspect of the original lingers…just a tiny bit.

Keanu Reeves’ new documentary Side by Side chronicles the impact of digital filmmaking and begs the question–what is the role of celluloid in modern cinema? 10 years ago, The Inside Reel posed a similar question with its doc The Inside Reel: Digital Filmmaking, which premiered on PBS in New York and Los Angeles.

The “digital revolution” is one of the most significant changes in the film industry since the advent of sound and color.  It is also one of the most debated topics among filmmakers and fans.  The program goes behind the scenes and talks to some of the world’ most successful filmmakers about the advent of digital technology to see how it’s changing the way films are made and ultimately seen.  By Interviewing over 32 respected actors and filmmakers, including Johnny Depp, Tim Burton (Edward Scissorhands, Batman), and Academy Award winning Directors, Oliver Stone (Platoon, JFK) and Robert Zemeckis (Forrest Gump, Back to the Future), The Inside Reel: Digital Filmmaking offers a glimpse and speaks to those at the forefront of this “evolution in filmmaking” and illustrates where these filmmakers believe the future of cinema is headed. The program highlights some of the biggest achievements and innovations of this digital revolution as well as illuminates some of the misconceptions and pitfalls filmmakers may fall into with the abuse of this technology. From desktop editing to photo realistic dinosaurs, digital technology is expanding the palate for all filmmakers and is forging cinema’s evolution into the 21st century. Marilyn Ross of The Hollywood Reporter called the program “a must see for anyone who loves movies.”

The Inside Reel‘s From the Vaults: The Directors DVD featuring interviews with George Lucas, James Cameron, Francis Ford Coppola, Quentin Tarantino and many more is coming to Amazon.com this fall.

Keanu Reeves’ Side by Side will be released theatrically on August 17.