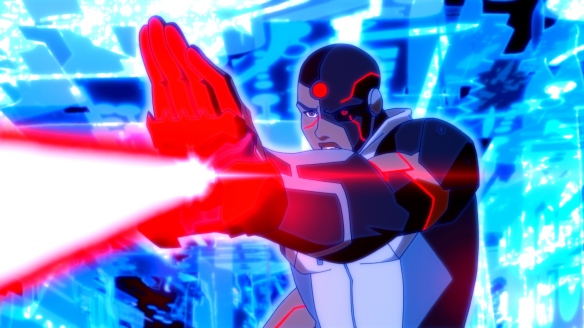 The aspect of finding a way to be delivered from evil, or at least find the basis of connecting with the true nature of power, can move back and forth in a hero’s journey. The final 3 episodes of “Young Justice: Outsiders” takes this undeniably into account. Without spoiling too much of what the progression has in store, Episode 24: “Into The Breach” enters in an idea of the Meta War but is more a metaphor for Cyborg as a character becoming understanding of his duality. But the villain herself in this episode has the same paradoxical nature to her own design. Granted it is about these characters understanding that what makes them different allows them to exist outside the hero complex that affects those like Batman & Wonder Women.

In Episode 25: “Overwhelmed”, the idea is more of grief and loss than one of failure but also one of hope. The journey of Artemis to provide a texture of closure for those she has lost takes on a purgatory connotation that affects to a point with a sense of therapy. The sense of heartbreak is quite well explored with the metaphors of sunrise and sunset. This journey also seems to balance in a rumination of the progression to adulthood. Artemis may not be complete but it is who she is becoming. In this way in the same episode, the same can be said to be true of Forager who enthusiasm and belief in good also strikes at the problem of his naivete in a darker world.

In the final episode of the season, Episode 26: “Nevermore”, the idea of loyalty and respect versus birthright plays heavily in the storyline. The battles of conscience and of control are very powerful motivators. Forgiveness is also a big texture in the endgame of the season but also of consequence. The idea of power and how it is wielded as well as the choices made are asked of most of every character, between what one can do and the paths chosen. The ending cota speaks to balance but also contentment while new power takes hold, its path of righteousness neither or either altruistic or misguided as is the spin of every wheel.

The final three episodes of the 3rd season of “Young Justice: Outsiders” hit different ideals of superhero culture without feeling the need to have every sentence and action connected. While the details are there to be seen, the journey of the young heroes continues.