The angle of the Freddie Macs crash seemed quite unreal to some Americans because of the ideal was that the US economy had safeguards in place even after the insider trading scandals extracted their penance from the system. One of the great intentions that “Margin Call” provides is the multiple progressions that allow for such a large scale meltdown from the bottom up in allowing the viewer to experience the unraveling structure from any level. 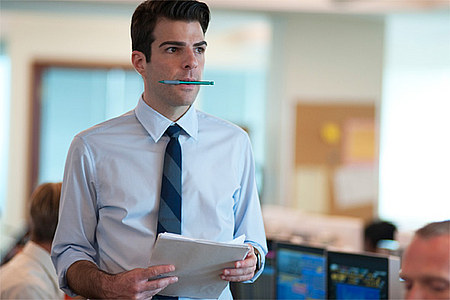 The basis begins around the low level traders/assessors (specifically Zachary Quinto of “Heroes” and “Star Trek” fame) who after the head of risk assessment (played by the always understated Stanley Tucci) finds a numbers problem in the overhead trading, blows a hole in everything they are doing. This causes a spiral from downstairs upwards which is distinctly interesting to watch because of the class structure and specifically the actors playing them. 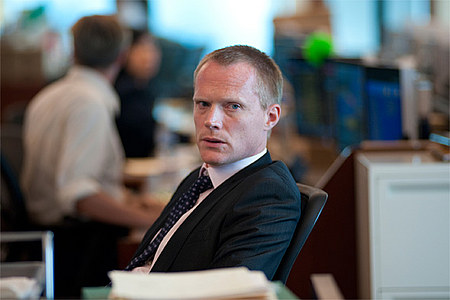 Moving up from Quinto, the next step is Paul Bettany, the hot shot trader they look up to who pulled down 2 milliion the previous year which is alot of money for them. He functions as the go-to guy but understands the functioning beneath him having just left. Kevin Spacey heads the department as a guy who wants to do good but understands the bottom line despite the necessity to skirt it. He functions it with just the right amount of razor yet the unbalance threatens beneath him as he struggles for the middle common ground. 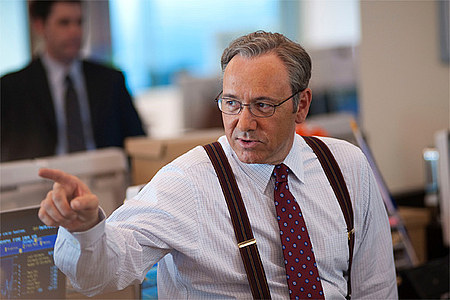 What is really interesting to watch is the difference in power and screen strength when Jeremy Iron faces off at the conference table of sorts with Spacey. The presence of Irons (which we have not seen in a while) distinctinctly rings true and shows a difference between even actors of 20 years ago. Sopacey regains posture in later scenes so his intention might have been to defer to Irons but it still comes across as glaring in a good way.

In terms of the mid tier connecting, the balance of Demi Moore as the risk management executive and Simon Baker (of “The Mentalist” fame) as the figurehead of the company provide an interesting dichotomy. This role for Moore is more indicative of her high-profile work in films such as “Disclosure” where she uses both her physicality and psychology to work what she wants. Here there is a repercussion factor which works quite well in terms of showing her paradox while Baker’s player is a lot more sinister because he smiles and sneers through everything he is doing (unlike his TV counterpart).

In the periphery, what the film does is show the unraveling of a major institition within a critical 48 hours in the American economy from the inside. The funny thing, especially in the way it is portrayed, is that on the outside even during the dreaded fire sale everything seems normal until it was too late…and the big money guys let it happen. “Margin Call” shows the danger from alternate angles made promising by grounded performances, tense structure and a focused progression.

more about “The Inside Reel: Star Trek Uncut Edit“, posted with vodpod